More Than Meets the Eye

I had kind of a lazy day. I didn't really take any pics until 10 minutes ago when I snatched my sons little transformers. I found it fitting since tomorrow we will be at BOTCON...I know hold your jealousy in. My son is excited though cause he thinks he is going to get Optimus Primes autograph.

Sadly it's one of the better conventions I have been to. My husband is kind of a toy geek (love him) so we have been to Star Wars and even a Star Trek convention before. It is so fun to people watch.

Plus I could do anything with my husband and his friends, they are hilarious. There is one convention that a bunch of us go to every year. On the way one year we stopped at a little restaurant/bar dive with a jukebox. There was a man who had started drinking early shall we say who was singing to every song. When my husband when up to fill it with songs the guy kept talking to him telling him that he had to pick good music cause once they are on there they have to play out, and even if the jukebox was unplugged it had to finish the songs selected. He was being really obnoxious so my husband said "Don't worry man I got you." He put the first song as Free Bird or something like that...and the next 6 as "Who let the Dogs Out" We left right as the first Who let the dogs out began. That car ride home was some of the funniest conversation speculating what the people at the restaurant were doing for the next half hour or so as each time that same annoying song played...good times. It's the small things that amuse me.

Wow that was some serious reminiscing, sorry. Feel free to skip over that. Course if you are reading this you already have or actually read that lol.

Anyway on to the pictures, I kinda liked the noise: 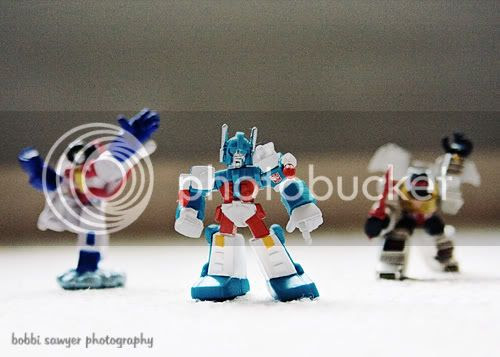 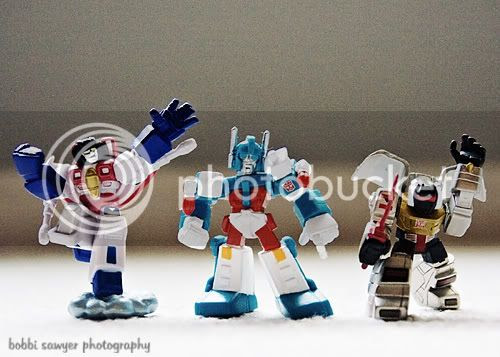 These are SOOO COOOL! I wanted Transformers toys SO BAD when I was little but my mom wouldn't buy them for me because they were "boys toys". Grrr.

Amd OMG- I love that movie! I say random movie quotes ALL THE TIME and I don't even realize I've done it until later, ROFL! I thought about that after I typed it and wondered if anyone would catch it. Figures it would be my sista from another mistah! :)

The guy on the left looks like he's doing ballet. :-) Do you guys dress up when you go to these conventions? Because I'd like to see those photos. :-)

I loved the movie too. I had a tone of transformers as a kid almost a complete collectiona dn mom tossed them all. I could have made a killing on ebay with them. LOL

I never got any transformers either, oh to be a tom-boy and the hardships it caused, lol. Luckily I have 2 boys, and I can play with them whenever I want, so there, lol. Cool pics, I like the noise,too.

I'm thinking this could be a source of many, many more photos! Actually, I really AM jealous of the conventions you go to; it sounds like fun!

great photos! the noise definately works on these

Neat pics, I really like the noise these too.

The noise looks great here and I love some transformers!

I like the noise in these too. Have fun at the convention and hope you get some more funny memories! :)

very cool. great DOF and perfect color. I had a lazy day today to

Those are wayyy cool! I think the noise really adds to the look of the photos! Nice!

Those are too cool!! How fun! I think they came out great and the go perfectly with your music too!! Have fun at the convention!

oh i love that first one..such a cute family.

BOTCON was pretty cool. You guys need to come to Wizard World Chicago with us! It's always a lot of fun.