Little back story- My husband started this thing that our friends all do in pictures called the "Money Shot" It's kind of like just holding your two fingers out with your thumbs up...it can really only be shown though a picture to get it.
So it looks like this: 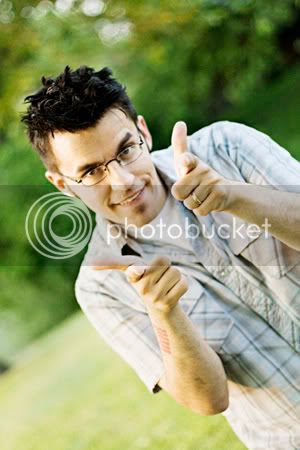 Hmm old picture by me and now I see where my husband gets the extreme angles thing..so glad I grew out of that.

Anyways, this is a common theme among ours and friends pictures- there are group "money shots" in our wedding pictures, in the hospital pictures from Keatons birth, any get together we have. It has even spread to friends of friends..some of them have traveled across the world and send pictures with the money shot. Some day I will just blog all these pictures.

For my son we have named this the "Happy Shot" just because I don't want him yelling out money shot for obvious reasons....every time he does it he sticks out his hands and say "Happy shot"

So now to my post of the day. I have tried sun flare before but w/out much success(granted I didn't try too hard)so I decided to try for that really hazy sun look that I think most people avoid. I don't think is really a great look for a lot of pictures but when it works it really works. Just on a personal level for me it worked for this picture, not sure about everyone else but I love it. It feel nostalgic to me.

Everything about this is so Blaze-so here is his "Happy Shot"
SOOC: 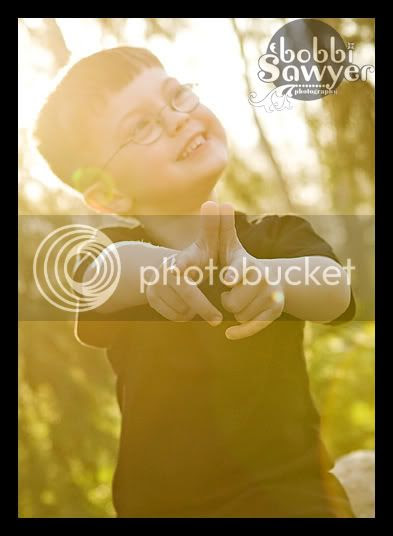 With a little texture: 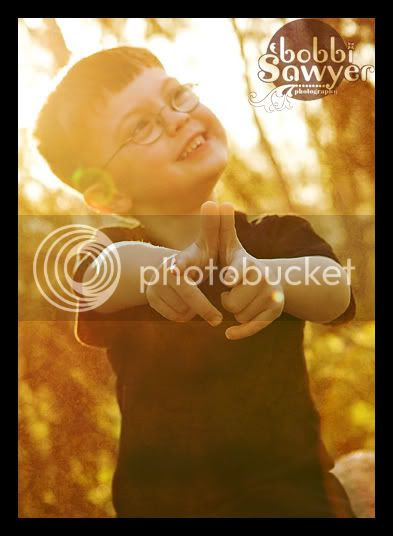 Too funny! That is great when you can make a little fun thing turn into a trade mark!

Adorable and yes, definitely happy! I love the depth and warmth the texture adds.

Love you "happy shot!" I like this hazy look, it feels so warm.

awwww those are cute!!! love how they are both doing it!

too funny! love how you applied the textures to this.

I love how the focus is on his little fingers. It tells the story perfectly.

One of my DD's friends used to do this move all the time, accompanied by a wink and a mouth noise (like a "chk chk"). We call it the Hannah.

Too funny! Those would make a great storyboard!

great stuff. love it! and kudos to your self portraits too!

That is great how funny

Fun, fun post! Love your story about the monkey shot! And the happy shot is definitely happy!

Awe, that is too cute! I really like what the texture did to it too, nice.

those are so cute.

These shots are so funny. I love them! Great capture.

LOL about the "money shot"! That is hilarious! My dh and his guy friends have a "pose" they always do too... I really should make it a point to photograph them doing it, it is too funny!

I really adore this shot of Blaze- the flare and the haze are amazing- it makes everything look a little surreal or dreamy, I love it! And the texture just makes it that much more awesome! It's fun to break the "rules" huh? :)

Cute! What a great smile he has!

So funny, these are cute! Great shots!

Love it! and the story behind it is just too funny!

How cute!! Looks like such a fun thing for all of you to share!! I think it works here!!

I think it works well for this shot! And the happy/money shot is just to cute!