Do you know your Spock? Apparently there is a Good Spock and an Evil Spock. I told Blaze to show me what the good Spock looks like and he showed me this face: 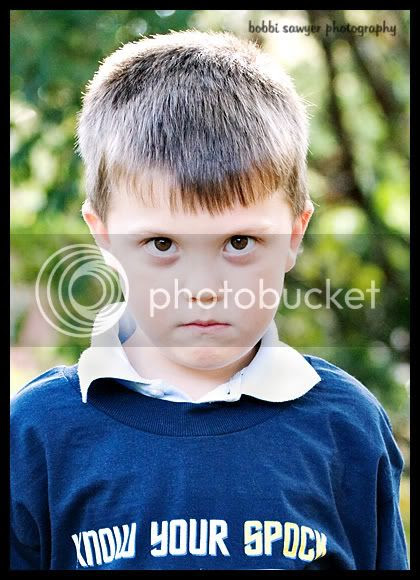 Then I told him to show me what Evil Spock looked like so I could have a picture and he said, "Mom Spock doesn't show emotion so just use the same picture and say that is evil Spock." Lol...I apoligize for not being a Trekkie.

But if Spock doesn't show any emotion how do you explain this?! 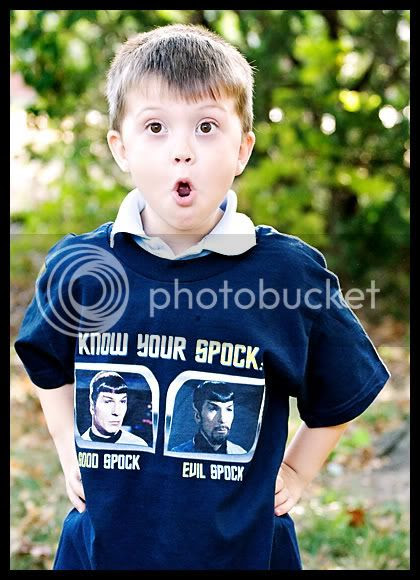 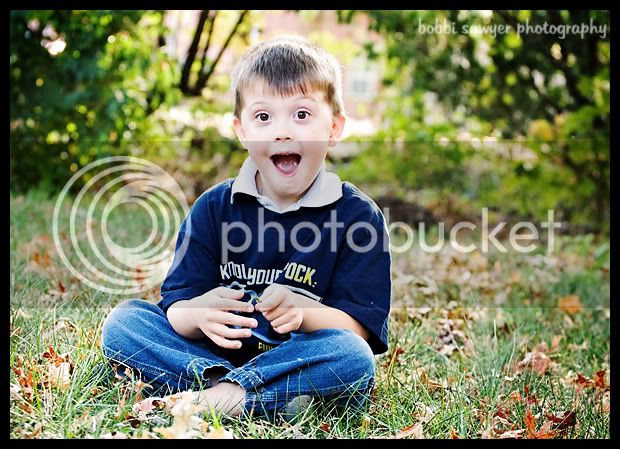 I rest my case.

Confession Time- I wrote this post like I don't know anything about Star Trek (trying to maintain some amount of coolness)but I have to admit I have been forced to watch some episodes and even *gasp* kind of enjoyed them (ok, ok, I was dragged to a Star Trek convention too...not gonna say I enjoyed that though except for the people watching...ah yes the people watching.) So James if you are reading this, there I publicly said I kind of enjoyed Star Trek. Can I please have this lens now, lol ;) I ain't too proud to beg.

I wanted to thank everyone too for their compliments about my hair too, they made my day!
Posted by Bobbi at 3:20 PM

Oh my...he is doing rather well with his impersonations. I love the last two photos...haha. They totally crack me up.

If Mike would like me have a new 5d I would SO watch all of those awful Clint Eastwood westerns he is always begging be to watch.

Never got into Star Trek - but he is a cute Spock!!

When we went on our honeymoon, we stopped by the Star Trek expeirence (Vegas) becuase William is a big trek. Well...I gave the vulcan sign to a clingon and he's never forgiven me:)

He hit the nail right on the head about the emotions. Although, you could tell him that since Spock is half-human, he sometimes slips up and lets some emotion out...

Can you tell I was a devoted Trekster???

Too cute! Love his expressions.

Wow your son is certainly no Spock but a thousand times better. He has the most wonderful expressions. ~Jackie

Very cute post! I don't know much about Star Trek either. I still can't do that wierd "V" with my fingers!
Shawna (shawkrem)

He is so cute. Good thing My kids don't ask me about Star Trek I am clueless. BTW I had to look your hair is soooo cute.

Awww! Well Blaze could never be Spock... he is way too expressive!

And I would watch a whole Star Trek Marathon to get a new lens. I ain't too proud to beg either. ;)

Love those expressions!! He's a cutie!

So this just gave me new ideas to try during photo-sessions! I'm going to just ask the kiddo's to show me their spock faces and hope they don't think I'm crazy lol! But I just love all of his expressions!