I just wanted to give a huge congrats to my best friend Rachel and her boyfriend...I mean fiancee! He popped the question last night and she said yes (I mean I think she did even though I did not hear it... but there was hugging and kissing and he put the ring on her finger so I am pretty sure that is a yes lol)

The story is a tiny bit long so if you feel like it skip over to the pictures and just join me in saying "Awwwww!"

My husband and James have been talking about this plan for at least a couple of months and it all worked out perfectly.

Her boyfriend (fiancee...gotta get used to that) loves Halloween and we were going to an awesome haunted house which was a couple of hours away so they got a hotel room...how convenient. Unfortunately he got "sick" though and was unable to make it. We had 15 people with us though so we convinced her that she should still go. It was so funny the whole time at dinner she wanted to go back to the room to check on him and in the over an hour long wait in the line she was sad. She kept talking about how bummed he was going to be that he missed this. So we kept convincing her that it would be ok. Unbeknownst to her though he was in the haunted house just waiting for her. He and my husband had gone through earlier and set up the plan to notify him that our group was coming. When we got to the designated area we all surrounded Rachel and were trying to get her to stay in one place while this guy in a mask grabbed her hand. She of course was freaking out and trying to get away. The guy in the mask got down on one knee and pulled out a box...to which she freaked out some more not knowing what was going on. Then he pulled off his mask and opened the box with the ring and she freaked out even more...now knowing what was going on. It was perfect, and super cute and so him. She could not have been more surprised.

Here are a few pictures from months ago...I think I need to get some updated ones with the blingage! 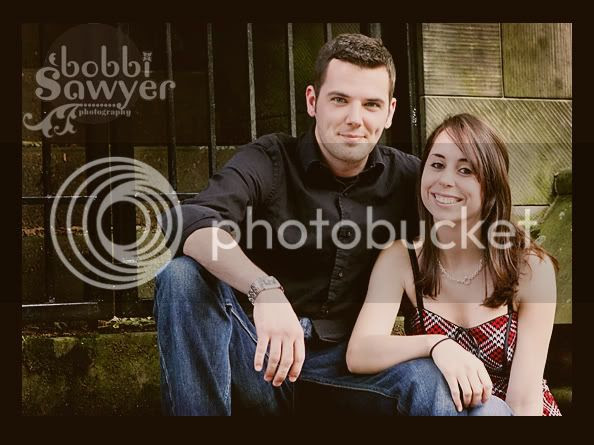 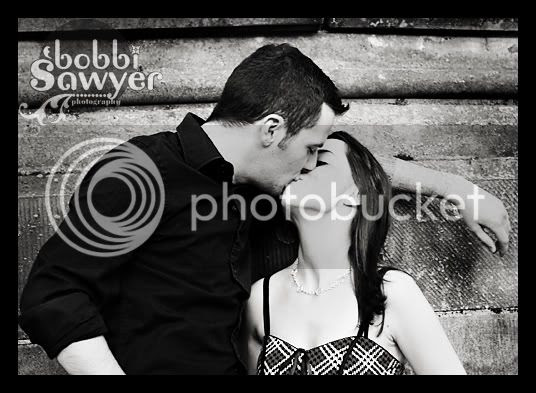 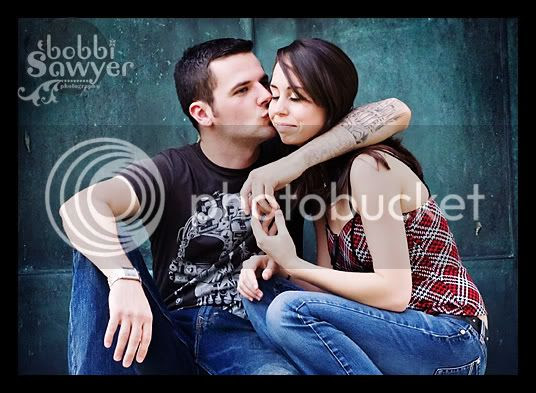 I even edited a new one...that I specifically took with this crop in mind and just forgot I had it. Dur. It reminds me of this song playing now. 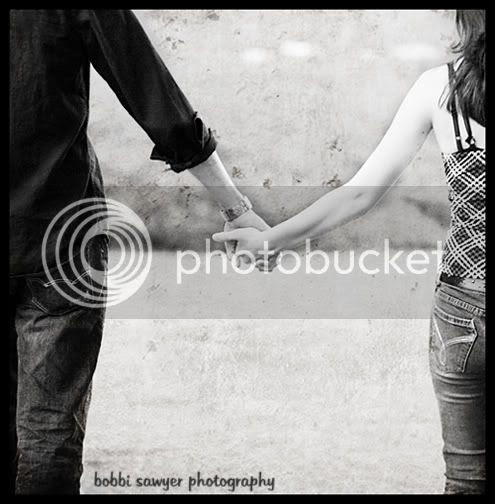 Rachel, I love you and you are such a great friend who has always been there for me. James and I couldn't be happier for the two of you. I think James (your James...and my James lol) is an amazing guy and you couldn't have done any better. Just don't pick ugly bridesmaids dresses or you know what will happen ;)

I could be a little biased as to why I like James so much...I mean his name is James...with black semi spiky hair...and he collects toys. Remind you of anyone???
Posted by Bobbi at 10:15 AM

Awwww, that's one of my favorite getting engaged stories I've ever heard! I can't tell my DH; he suffers from proposal inadequacy syndrome and still regrets his lame proposal 19 years later. :-D
To answer your question from the other day, I do think my 40D is performing better since I got it back from repair. The notice said they adjusted the exposure and fixed the shutter.

Wow what a guy!! that is so seriously cool! can't wait to see the e-pics you take!

What a sweet romantic story!! She is a lucky girl!! :)

Great story. Love your blog and music playing. What song is that?

congrats to your friend! i love the last one, it is great!

How cute! They are a good looking couple!!

AWWWWWW! What a very cool story! He gets brownie points for being so creative, and EXTRA brownie points for having her friends there to help her remember the moment (there's so much going on so quickly it's easy to miss the details!) Congratulations to the happy couple!

What a beautiful couple, I love that third shot of them! :)

I can't believe you were in on it the whole time and I was completely clueless. I must be that naive! ;)

You and James are such amazing people, I couldn't ask for better friends if I hand picked them myself! Thank you SO much!!

Oh, and James says I love you. Not to you, to your James. haha

Now that is a STORY. I love hearing the stories behind the couple, and that is perfect. And they are such a sweet couple. I love that last shot of them holding hands with the great texture.

Soooo cool!!! They are a beautiful couple!!!

How wonderful! And I especially love your first and last photos.

OMG! That is the sweetest thing! I want a romantic engagement story, LOL! Mine was BORING! ;)